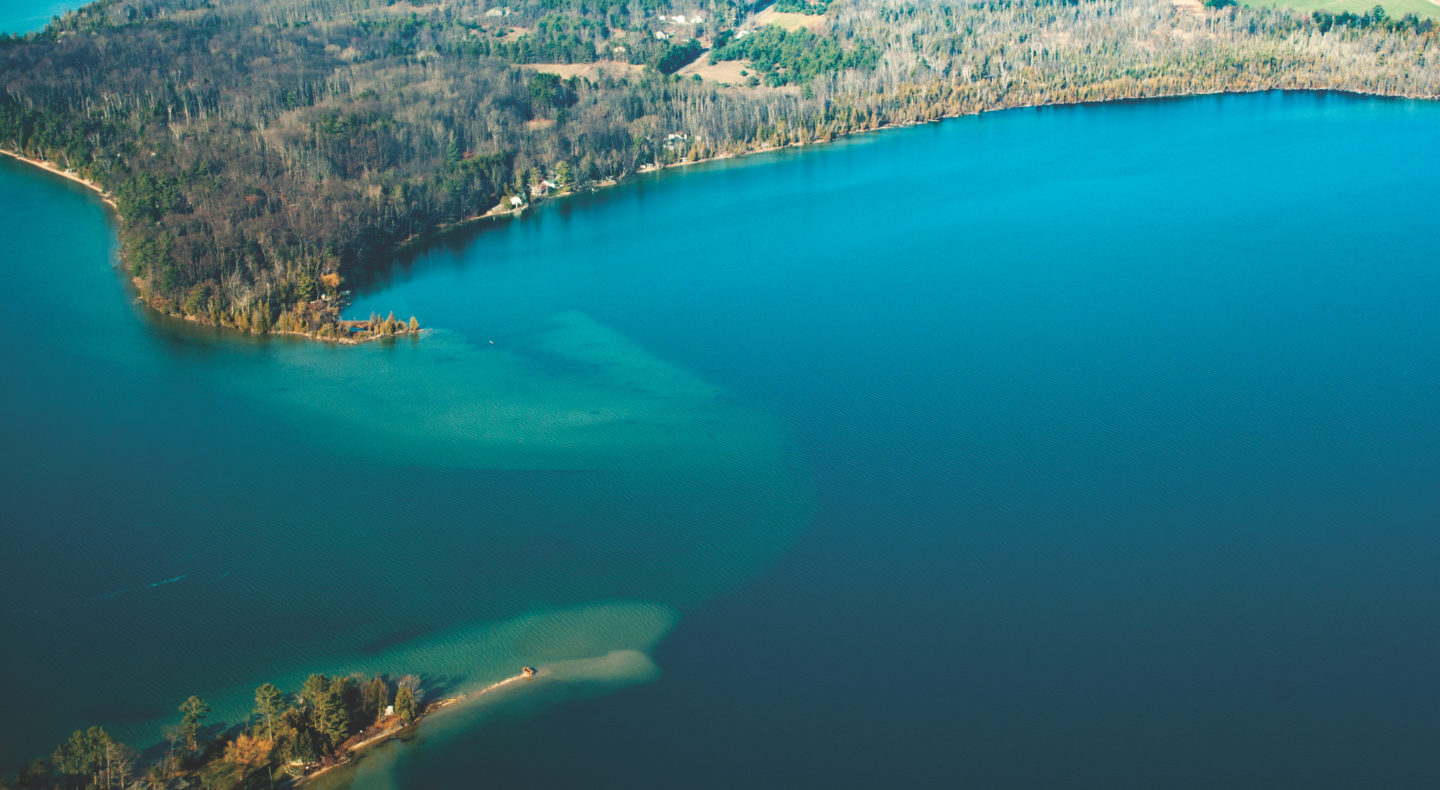 Our Love and Our Duty

There’s an air of reverence in Dick Crout’s voice as he describes how an average summer morning might unfold in his little corner of the Chain of Lakes.

More often than not, he awakens to the sight of loons splashing near his Elk Lake cottage, their striking black and white plumage unmistakable even in the day’s earliest light. Sometimes by himself and sometimes with a friend or two, he loads his fishing tackle into a small boat and pushes off into to the calm morning water to see what he can catch.

“I feel a motivation; a fire that’s telling me that now’s a wonderful time to make a big push.”

And despite repeating this ritual hundreds of times over the decades, he never ceases to be awestruck by the natural world around him. If you have good luck, he says, you’ll see a playful otter along the shore as you cast for bass and pike. And as you pass the mouth of the Torch River, it’s wise to keep an eye out for a pair of Caspian terns that somehow come back to the same spot year after year.

Onward to the south end of Lake Skegemog, Dick delights in seeing eagles in a giant nest along the shore not far from the old Copeland farm. “We see eagles any time you want to see one,” he said. “Now, you’re not going to see all of them all the time, but this year we had two adults and three immatures.” 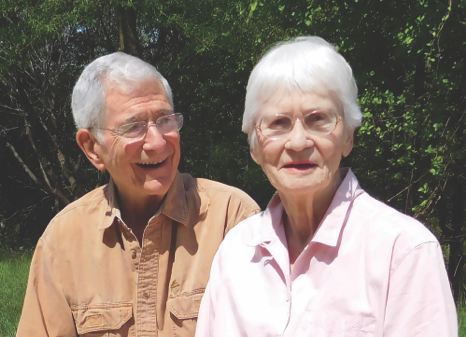 Countless people fish in countless places, of course. But Dick is both proud of and humbled by all of the wondrous sights he’s able to pack in before lunch even crosses his mind.

“You tell me a better place for doing all of that – and I mean anywhere,” he said. “The nature is just so wonderful. And add to that some old friends – what more could you want?”

It’s people like Dick Crout who have helped mold the Grand Traverse Regional Land Conservancy into the robust, successful organization it is today. Along with his wife Carol, Dick and his longtime friends and philanthropic partners Jim and Debbie Norling have combined to provide substantial funding for several GTRLC projects and operations over the years. And their backing goes beyond a checkbook.

“I think this campaign is coming in the knick of time. I almost wish it would have come a little sooner. The winds of change are really coming.”

“There’s a reason we’re one of the best land trusts in the country, and it’s families like these,” Executive Director Glen Chown said.  “They’ve provided solid and consistent support to our organization year after year after year. I’ve always turned to these guys for critical strategic advice. There are few people I trust as much as them.”

Now, both the Crouts and Norlings are making substantial contributions to the Campaign for Generations. What better way to appreciate the region’s natural beauty than to rise to the challenge of protecting that beauty for all future generations?

“The idea is that if I got to enjoy all those experiences, wouldn’t I want my children and my grandchildren to enjoy them as well?”

“There’s no greater satisfaction than seeing those eagles flying around there and knowing that I helped saved that habitat,” Dick said. “There’s just no better reward than that.”

Both Dick and Jim spent much of their childhoods in the Chicago area and completed successful careers in medicine and technology, respectively, at various locations across the country. But they always remained strongly anchored to their summer residences, which sit not far from each other near the confluence of Elk Lake and Lake Skegemog. 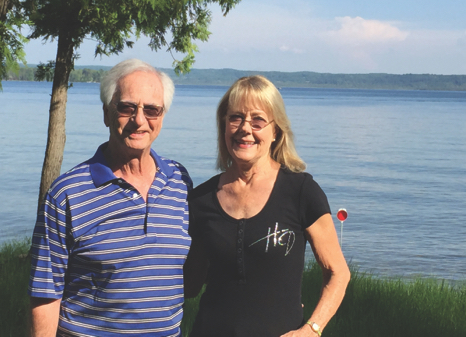 Dick, a physician, worked at the National Institutes of Health before eventually running the drug evaluation wing of the Food and Drug Administration. In 1946, his parents bought a residence in Wabigama, an Elk Lake resort community founded nearly 100 years ago by University of Chicago professors. Despite working at stops across the country, he’s been coming to the area nearly every year since high school. That continues now from his full-time home in Maryland.

“I’ve had two rules about jobs. I would never take a long commute because I thought it was a waste of time, and the second one was I would never take a job that wouldn’t allow me to return to Michigan in the summer,” Dick said. “Because no matter where you go around this world, coming to Michigan is coming back home. Our biggest root always was that summer vacation in Michigan. It’s been very important to the whole family.”

Jim, who now lives in Arizona, worked at Motorola for 35 years. Among other posts, he managed the company’s semiconductor business before retiring in 2000. His connection with the area dates back to 1948, when his father – a civil engineer working in Chicago – looked on the bulletin board near his office water cooler and saw an index card advertising a cottage for rent in northern Michigan. After renting for a few years, the family built their own place along Lake Skegemog.

The family love for the place continued through the generations. Jim’s two children, both in their early fifties, have only missed one summer on Skegemog their entire lives. His son, Jamie, said he wants Jim to join him in getting a tattoo of the coordinates of the family’s dock, which juts out into Skegemog a short distance from the cottage.

“He’s absolutely serious – he’s done the GPS work, he knows the exact coordinates, and he’s badgering me to get the tattoo. I don’t know yet whether I have the guts to take him up on it,” Jim said. “But that just gives you an idea of the connection and the power of
this place.”

Both Jim and Dick have been giving to GTRLC since its very first year. Jim’s mom, Doris, even helped out as a volunteer in those early years, helping to stuff envelopes and mail letters. Their first major involvement came
in 1995, when they teamed up to fund a critical 30-acre expansion to the North Skegemog Nature Preserve, an ecologically important Conservancy preserve not far
from their cottages.

Then, in 1997, Jim and Dick provided a major challenge grant for several projects throughout the Chain of Lakes watershed. This marked the first challenge grant in GTRLC’s history. These now common grants involve a donor or donors offering to match, usually dollar-for-dollar, money provided by other donors. Because donors know their money will be doubled, challenge grants provide fantastic incentive.

“It’s pretty common now, but when they did it, it was ahead of its time, at least for our organization,” Chown said. “That was a very pivotal and important grant in the Conservancy’s early history.”

Like most others who donate to GTRLC, the Norlings and Crouts give because they feel very strongly about protecting the region’s natural beauty. But Jim in particular is also thinking about making sure that the generations that come after him will get to enjoy the same wonderful experiences he did.

“I have environmental-based motivations, of course, and I embrace all of that side of it. But for me, the real and primary motivation is preserving experiences. These experiences have been captured over decades, and they become a sort of memory bank that makes you smile, no matter where in the world you might be,” Jim said as he walked around his cottage, glancing at decades’ worth of framed photographs of himself and family members enjoying the outdoors.

“The idea is that if I got to enjoy all those experiences, wouldn’t I want my children and my grandchildren to enjoy them as well? And an awful lot of those experiences really depend on this place not getting overrun with development or anything else that might dull them. I want the experiences to have that same sharp, vivid feel.”

Jim and Debbie shudder to think what might have happened if an active land conservancy wasn’t around to protect the region’s most valuable natural areas, farmland and
scenic vistas.

“We’ve traveled the world, and we’ve seen how beautiful areas can get slammed by development. I just didn’t want this area to become the Cape Cod of northern Michigan,” Jim said. “And once the snowball starts to roll downhill, you really can’t bring it back. Once development gets its grip on an area, it is so hard to slow it down.”

The Norlings and Crouts are eager supporters of the Campaign for Generations, in no small part because they know that pressure on the area has never been greater.

“I think this campaign is coming in the knick of time. I almost wish it would have come a little sooner. The winds of change are really coming.” Jim said, “The demand for these vacation properties, the valuation metrics….maybe ominous is too strong of a word, but the forces are lining up to challenge a lot of places that we’ve sort of taken for granted are safe. I feel a motivation; a fire that’s telling me that now’s a wonderful time to make a big push.”

“It’s a challenging future, but the challenge has to be answered – people have to rise to the task,” Dick said. “It’s our love and our duty.”