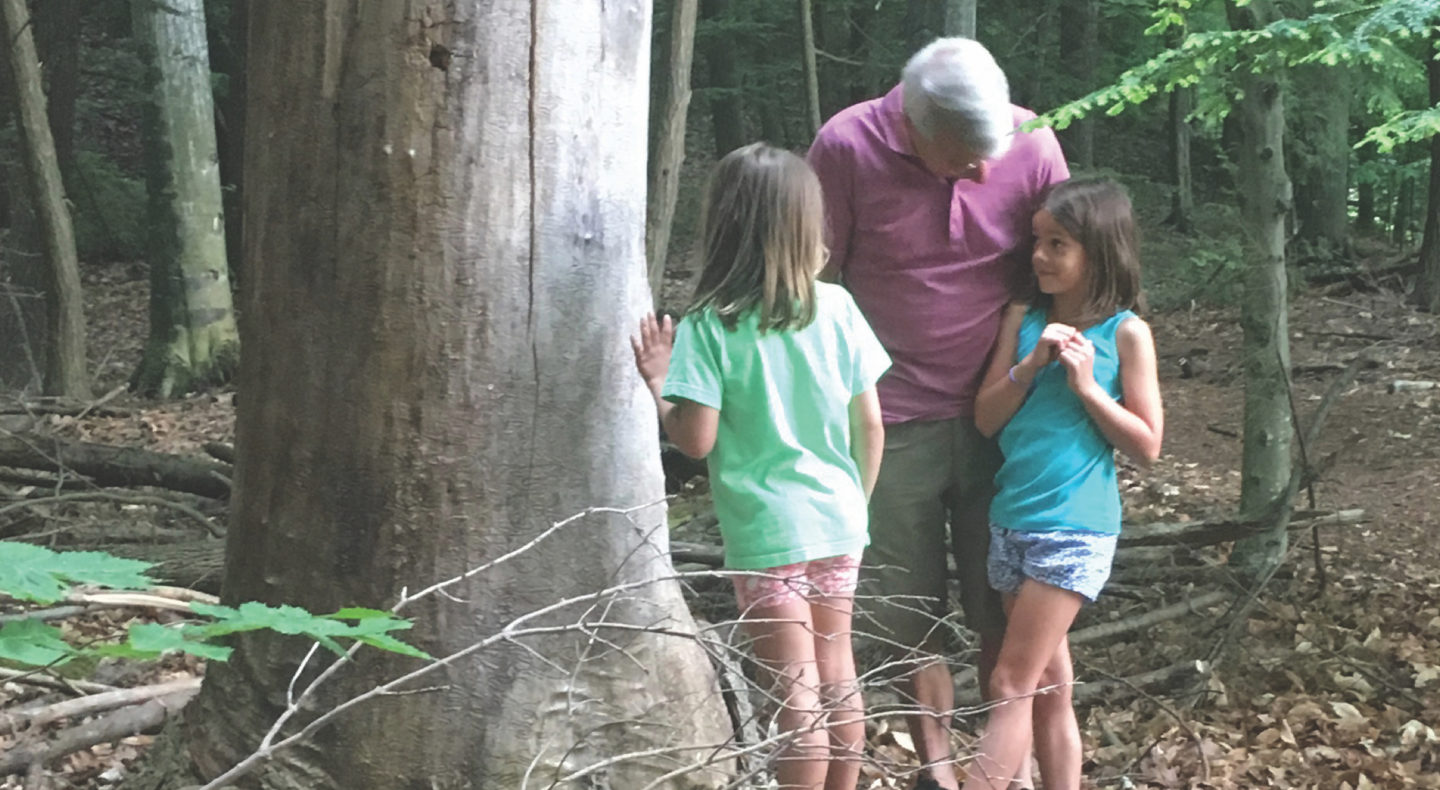 Bill Holland is the type of man who gets a certain twinkle in his eye when he’s telling a good story. And if you’re spending time with Holland, the story is likely to involve fishing.

There’s the one time he lost a big fish at a young age and grew very upset. His father, eager to impart a life lesson, told him the fish was fighting for his life and deserved the utmost respect for winning the battle. The irony wasn’t lost on the younger Holland when his dad let out a torrent of choice words only a few minutes later when he lost a big fish of his own. 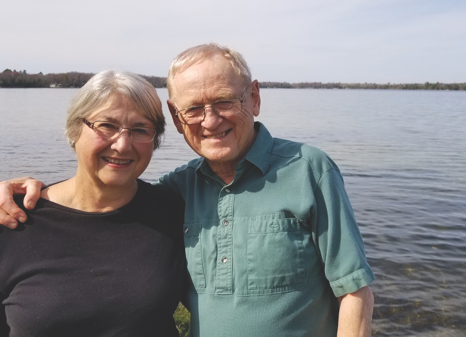 “He wasn’t very amused when I reminded him of what he told me,” Holland said with a grin.

From his home on Birch Lake near Elk Rapids, Holland recalled more than a few tales of fishing glory. He also spoke of the reasons behind his decision to dedicate a portion of his estate to the Grand Traverse Regional Land Conservancy. Those reasons involved stories of change and loss, and a desire to make sure the region’s wonders are accessible to everyone for generations to come.

“Giving money to the Land Conservancy is the best way that I can ensure my goal that future generations have the access that I value.”

Holland was born in Saginaw and spent his career in the Detroit area working as a school psychologist. His first taste of the area came more than 50 years ago when the husband of a second cousin needed a ride home to the Honor area. So began a long career of hunting and fishing throughout the area, and the start of what is now a permanent connection. He began renting here in 1969 and moved here with his wife, Myrna, on a full-time basis after retirement.

One of his favorite spots back in the old days was a small lake in northeast Benzie County, where he’d camp in a nearby pine forest and haul a boat in for some of the best bluegill and bass fishing around.

“At that time, there wasn’t anything on that lake – nothing,” he said. “We had it all to ourselves, it was just pristine, really amazing.”

Many years later, a visit to the same lake left him with a pit in his stomach.

“All these cottages were jammed around there. That little lake was just destroyed. It just made me sick to see that. Looking back, that really was my first wake up call – what’s going to happen to all these gorgeous areas?”

Other spots became developed as well, sometimes limiting access in addition to sullying scenic splendor. Holland used to fish at the mouth of the Crystal River in Glen Arbor, but found that access lost when condos were built several years back. He became resolved to find a way to fight back.

“Looking back, that really was my first wake up call – what’s going to happen to all these gorgeous areas?”

“This area offers so many things. There’s a plethora of trout streams, if you like that, there’s skiing, the fall colors, you name it. It’s a paradise up here – a real paradise. It became my desire to see as many places protected as possible. I’ve seen too many things be destroyed,” he said.

Holland has three grown children and six grandchildren. Future generations weighed on his mind as he thought about loss of access to beautiful, natural places.

“Having those experiences enriches one’s life. Being outdoors in those gorgeous places like that, it’s something really good for the soul. To prevent those opportunities from being taken away is critical – very important.”

But how could he make a difference? After much consideration, he decided to leave a legacy gift to GTRLC, where he’d been regularly donating for many years.

“The desire to do something was kind of nagging at me. What can I do? What’s the very best thing I can do to make sure that this desire of mine is handled?” Holland said. “And I looked at a lot of different things….finally, I hit upon it. Giving money to the Land Conservancy is the best way that I can ensure my goal that future generations have the access that I value.”

Holland made his gift with the utmost confidence that GTRLC would make the most of the money.

“I’ve looked at your organization enough to know that if I’m giving to you, I’m giving to a good cause,” he said. “In a lot of ways it’s a faith-based decision. The people I have met in the organization have all been very impressive, the completed work is impressive. It’s heartwarming to not have any mixed feelings about the decision – there’s zero trepidation.”

Stepping Up and Giving Back

After a long, successful career in the Detroit area, Jill Byron made a move that she always knew was coming.

Byron had been visiting Northern Michigan since high school, spending time in various spots in the Grand Traverse and Petoskey areas. When it came time to retire after a career in advertising and branding with DTE Energy, she packed her things and moved to the beautiful Old Mission Peninsula in 2001.

“I always knew in my heart that I would move up north,” Byron said. “I didn’t know where for sure, but I knew that I would be up here.”

Byron got involved in preserving the region’s beauty right away, volunteering her time and energy into the renewal of Peninsula Township’s Purchase of Development Rights (PDR) program.  After living downstate for many years, Byron fully understands that unchecked growth threatens the visual vibrancy of the region.

“If you start filling up all the land with homes and condos and everything, particularly developments that aren’t well thought-out, and you end up with an area that’s not attractive or appealing anymore.” 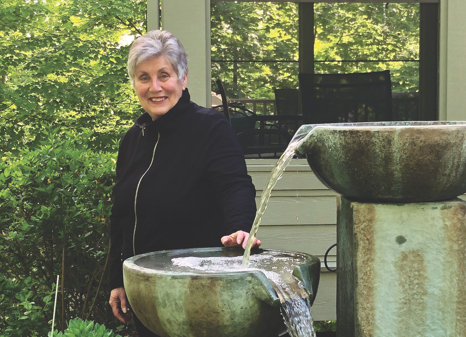 Continued growth in the region hasn’t eased Byron’s feelings on the matter.

“One of the biggest concerns that I have is that the things that I value most about being up here are being overtaken by development and building,” she said. “I’m not necessarily trying to keep it the way that it always was, but I think we have a responsibility to this region to keep it as pristine and beautiful and open to the public as we can, because that’s what draws people up here.”

After careful consideration, Byron decided to leave legacy gifts to the things she feels passionate about and that helped her to where she is today. A portion of her estate will go Michigan State University to provide scholarships to students in the university’s veterinary (because she loves animals) and communications (because she’s an MSU communications graduate) schools.

She also made a legacy gift to the Grand Traverse Regional Land Conservancy, a sign of her support for GTRLC’s work to preserve and protect the region’s natural beauty.

“If people have the ability, I think it’s a good idea for them to pick out something that’s important to them and to leave that legacy behind.”

“I want to have enough money to live comfortably and take care of myself while I’m here, but once I’m not here, I feel like I have a responsibility to the things that are important to me to give back,” she said.

Byron hopes that others take the time to arrange for estate gifts that can make a difference long after they’re gone.

“I think it’s very important to pick out the things that are important to you as an individual and make a bequest to support those organizations so that they can continue on with their work after you’re here,” she said. “If people have the ability, I think it’s a good idea for them to pick out something that’s important to them and to leave that legacy behind.”